Showcase: Dev squads Kushiel & Jehoel. Plus Ekfud has a go at airbrush OSL...

I painted my devs fully intending to add airbrush effects - but procrastinated about doing it for a couple of months. Airbrushing basecoats is fine, but adding details to an otherwise finished mini had me quite nervous... 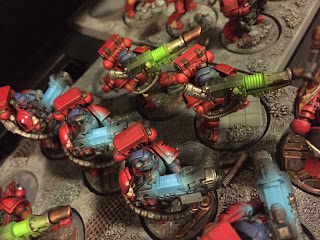 I think I might have done something silly... trying to build a 3D set of Space Hulk terrain with 40mm squares suitable for full terminator bases. 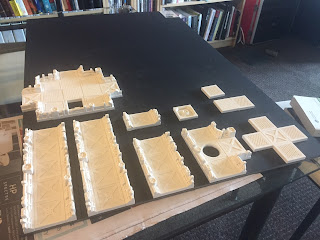 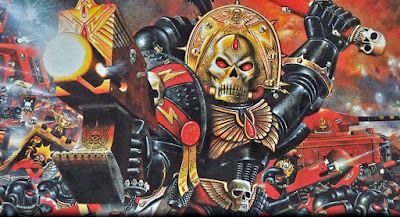 The Death Company have had a special place with me since 1994, although it's with a little shame that I have to admit I have never painted or even owned any. For a bit more background...

Putting a self-imposed deadline on this squad for the Bolter & Chainsword pledge has helped finish off my assault squad (complete with 2 changes of packs). Will do some better res pics with an SLR once the guys get a matt varnish over the decals. 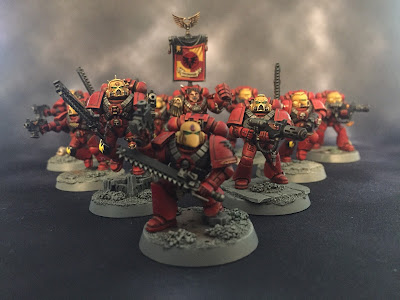 I've had a squad of airbrush coated assault marines sitting in a box almost since last Christmas. These guys have been given a big nudge along by taking part in the Bolter & Chainsword vow for 2017. The little bit of external (self-induced) pressure has been good to focus on getting them done... 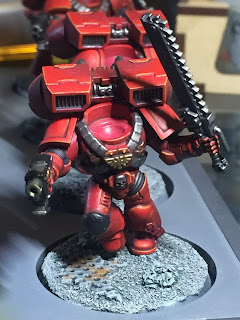 Since my airbrush (and about 400 other bits of equipment, paint, etc) have been on our dining table, I've taken the chance to smash out some more basecoating of scenery before they outstay their welcome.

The two Fallout inspired billboards that were knocked up a few weeks ago are now serviceable (if not yet weathered/detailed). 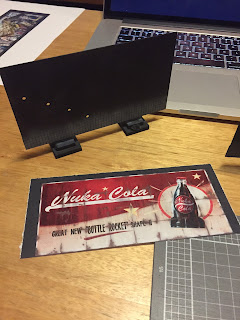 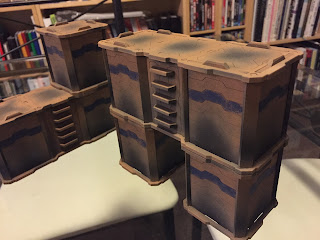 I'd been thinking about scratch building some billboards for 40k for a long time (even bought a packet of plasticard I-beams about a year ago...) but have kept putting it off as my ideas for building something featured overly complex designs of beams & frameworks.

I was pleasantly surprised to discover that a dude I've known through work for ~10 years is actually a hardcore closet gamer, and has recently put in 120+ hours exploring Fallout 4.

Our long talk about the Fallout world prompted me to just dive in and just build something 'good enough' rather than a perfect reflection of a real-life billboard. 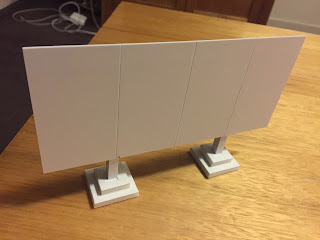 Final WIP post for my devastator squads: a couple of assembly shots and gearing up the sergeants. At some point when I dig my airbrush out of storage and varnish everything, I'll take some properly 'finished' photos. 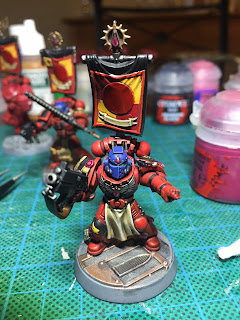 Last post left off the 2x Dev squads for 5th Co. with the marines themselves largely done. The 5x man unit here has had knee coloured black for eventual squad markings, and are now waiting for helmets & weapons - which come together below... 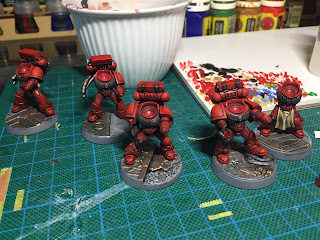 These guys were finished up to decal/varnish stage a while ago, but haven't yet posted the WIP pics from my phone. First stage painting doesn't look too different from tactical squads, but worth posting how I went through building these in separate parts to get to the fiddly details... 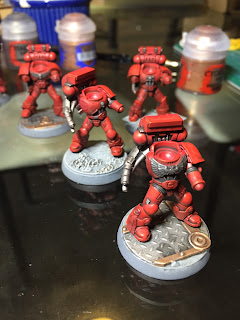 As many have probably caught on already... Blood Angels have a bit of assault squad mojo back (and then some) with the first update/errata to the Index volumes coming out this week.

Apparently my UK ordered copy of the boxed game (and codex/index) will be on my desk at work tomorrow, but in the meantime I've been poking around some of the discussion forums on loadouts and legal unit options.

Of course - the unit that was my WIP on the workbench is now no longer legal :-(
BA assault are no longer able to take meltaguns. 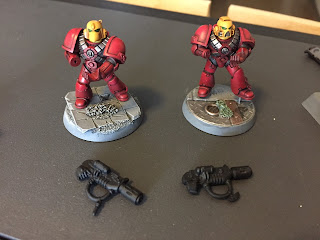 I spent last week in London and realised partway through my stay that the hotel was about 200m from the Tottenham Court Road Warhammer store. Since I was ~12,000km away from my regular store, I thought I'd sneak in to see what the pre-order copies of 8th edition looked like. 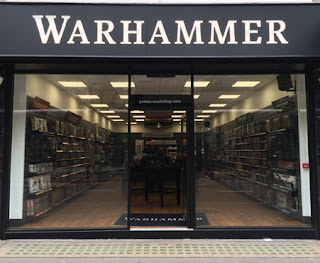 Almost forgot that I had this photo on the camera - I'd finished taking some more detailed photos of the second tactical squad for a writeup (in an earlier post) and threw the rest in field for a team photo before packing the gear away. 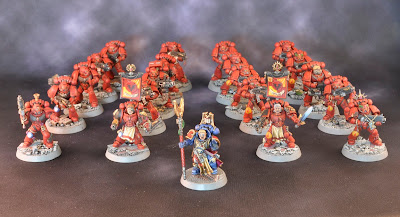 Good reminder to check that the SLR batteries are fully charged - only got a couple of this pose after taking the tactical squad shots before it called for a time out. Might have to take a bit longer on some army shots next time.

Since everyone is having a rant/review/analysis of 8th edition, it seems only fitting to have a couple of posts about how I'm trying to work that into building out the 5th Company. This isn't about the rules or strategy per se - just musings about how the changes affect a collector's project and a few notes on the experiences with GW in April/May on the way to the new edition.

5th Company, 3rd Squad 'Maalik', and second completed tactical squad. In keeping with a very loose mythology theming, Maalik is an angel guardian of hell, known as the keeper of hellfire. As a flamer/heavy flamer squad, this seemed like a good fit to me :-)

The excellent Battle Grounds sets from Miniature Scenery (if the link is still alive) were going out of production when I got hold of them about 2 years ago. The city grounds consist of 11 road tiles, 9 textured/city tiles and I also bought 5x 'blank' tiles that other terrain pieces can sit on. That amounts to a lot of terrain, and while they still aren't finished, I've made some progress over a long period of time when I feel like working on a big item (rather than minis). 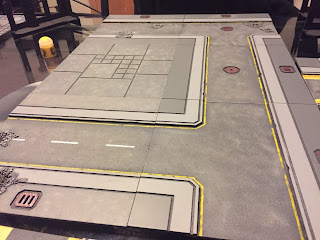 2nd Squad, 5th Company:
Finally getting around to loading some party shots of the tactical squads that were finished late last year - these were on SLR rather than my usual WIP mobile phone snaps; I've still got a bit more to work out on the light & studio-type setup, but getting there.

I bought a whole bunch of Warsenal terrain last Christmas and (apart from a set of wooden shipping pallets) hadn't had a chance to work on putting these together. The first half of the storage crates started their journey over the Easter weekend. 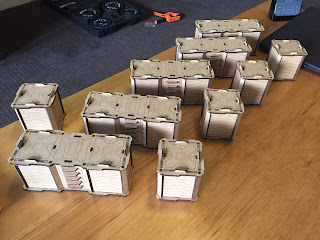 These suckers got their basecoat a couple of months ago as they are now nearing completion, it's worth catching up on some posts... 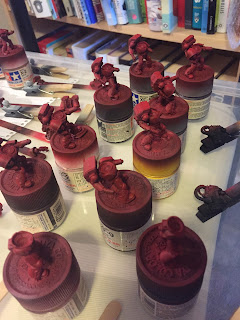 Fitting and assembling a squad display / storage board from Tablewar... since I now have a couple of units gathering dust on the shelf, it makes sense to finish up a couple of trays and tuck the marines safely into the display case on my floor. 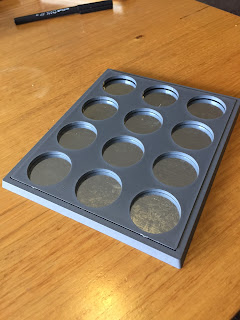 By no means perfect, my first try out of the Macromats backgrounds/stand for taking some richer DSLR photos was to grab the completed librarian and hit some poses... 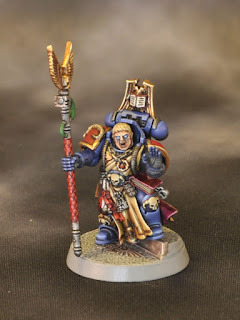 Finally adding some pics of the WIP Rhino exteriors. These copped their undercoats back in November but haven't been touched for a while... 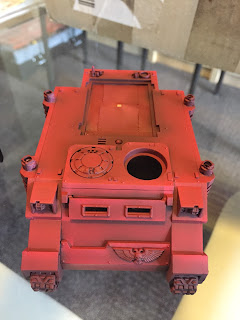 Two bits that came together in a post today - I recently picked up one of the excellent Macromat background sets from Tablewar and got a chance to test it out with an SLR camera rather than my standard mobile phone approach.

As one of the mats (there are 3 included in the kit) is a gradation from white to blue... it also seemed fitting that the first test subject as a 'showcase' would be my old tactical squad from ~1993 that I found in the cupboard over Christmas. 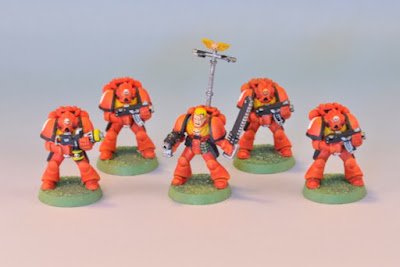 Rhinos are starting to come together. Interior weathering has been finished up and the hulls have been glued together just about ready for priming and base coating. 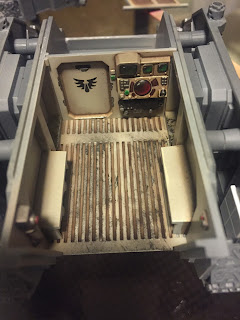 Going through the assembly process definitely highlighted some wasted effort - there are a few interior surfaces that you really, really can't see unless you put a miniature camera inside the tank. Good lessons for any future construction :-)
Read more »
Posted by Ekfud at 15:09 No comments:

It turns out there are an awful lot of parts to a rhino if you intend on painting them thoroughly and including an interior. It took the best part of an afternoon to paint the interiors of the group - although to be fair, that was for 3 tanks, including some extra wash drying time for the large amount of agrax that went on the floors. It was the first time I have painted a rhino of any form, and in hindsight I can see a couple of shortcuts and things I wasted time on that just plain won't be visible. 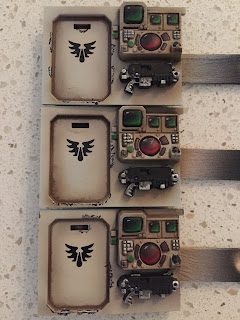 The end result for the control stations is probably a good image to lead the post with...

I've never really been a tank person in gaming - even on the PC, out of ~500 hours logged in Battlefield 2, less than 5 of those would have been in tanks. My Eldar army begrudgingly had a single falcon in the late 90s; partly as they were a rather annoying thing to paint (at least without an airbrush back then - some cool/quick effects are possible now) and partly as I always preferred extra ground pounders or at least a wraithguard/dreadnought addition before vehicles. 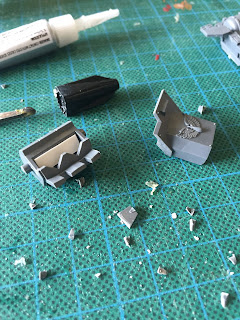 Net result, since 1993 I haven't bought or assembled anything using the iconic rhino hull - no predator, no razorback, not even a rhino itself. My brother had a rogue-trader era marine predator (the one with the square, metal-part gunner turret and the old school round hatches on the sides), which was almost unrecognisable as a marine vehicle after it had been modified with bits to fit a chaos army.

So think of me as a 40k tank virgin with this post.

I bought this case a while ago but worth a post now - the excellent folk at Tablewar have opened up an AU-based operation this week (tablewar.com.au) with their range of cases, accessories and mats now being sent locally from a distribution hub in Australia. 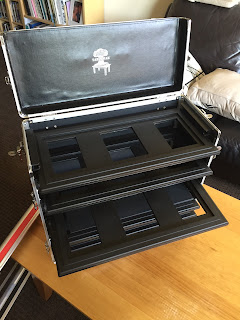 Previously, given the size/weight of the cases, the only option was to go with a freight forwarding company to ship from the US to Oz, with something in the ballpark of $200 for postage alone (with a bit extra for the forwarding service).

I've got a bunch of productive pics of assembly, priming and airbrushing a heap of new blood angels but after putting primers and red base on ten devs, ten assault and 3 tanks (and finishing two tac squads) I found myself keen to work in another colour for a short break. The librarian is the first character model I've painted in 15 years so wasn't expecting perfection - it's also a good test of several techniques that weren't really possible back then. 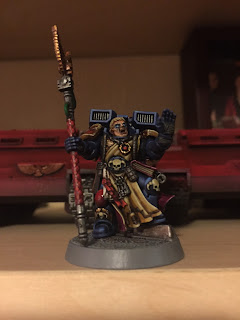