I realise mistakes may have been made... this could have been a much smaller and less involved project. Strap in - lots of background discussion on why I've done things my way. 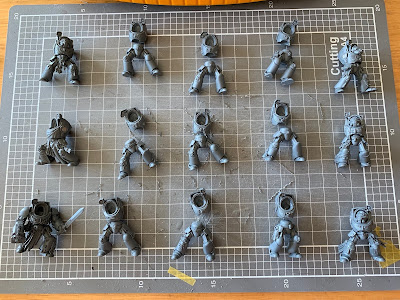 A good part of 2019 hobby time was spent building out a set of Space Hulk tiles in plaster (ie, several stages of this). My original thinking was to mount the 12 terminators that come in the Space Hulk box on 40mm bases so that they could be used for regular 40k games, etc.

Then having then looked at the poses that the space hulk terminators come with... it was clear that this would be a lot of extra hacking of plastic to get the stock bases removed. They also have a LOT of genestealer parts attached to them as well, which makes them more thematically specific to playing space hulk rather than regular battlefields.

My plan was therefore to get some old school shooty terminators and kit them out with the weapons for use in Space Hulk; and also have them usable for 5-man squads in 40k.

Getting some 'generic' terminators was actually quite appealing - one of the first editions of White Dwarf I got hold of in the early 90s was the one where metal cyclone and thunder hammer terminators were being released. I loved the look of those; they have very little extra details added onto them - it's just a big, heavy set of workhorse armour with the bulldog helmets and hump back.

I never got any of the metal ones - they were about $15-20 per model (metal) at the time and my teenage self didn't spring for them. It's a bit of a hobby gap that I've never had a marine terminator to paint in 25 years. Having a bunch of modern ones sounds great.

So... this is where I may have started to go wrong.

There are 12 models in the Space Hulk set, some with close combat weapons (claws & hammers) and some with bolters/heavy weapons. To get the mix of gear for those 12, I needed to get 2x boxes of regular marine terminators, plus a close combat squad (the latter I opted for the Blood Angels one which includes a banner).

Problem 1: that's 15 marines, but the 12 man mix for space hulk is something like 8 bolters, 2 heavy weapons and then 1 thunder hammer, 1 set of claws... so not enough leftovers to make either a hammer squad or a claw squad. Answer... Magnets?

Problem 2: *some* of the Space hulk minis also have a chainfist for cutting doors - they are only on the bolter-carrying marines, but with the heavy weapons in play, I might want to swap these out for a regular fist outside of hulk games. Answer... Magnets.

Problem 3: I was also trying to work out if there was a way to sneak the cyclone launchers in there... these were massively iconic during the 90s (Space Wolves could even take full squads of them). As a 'shooty' squad can only take 1x heavy weapon, that means I need some way of swapping the cyclone launcher out for a flamer or assault cannon for space hulk games. Answer... MAGNETS.

Problem 4: ... that's a LOT of magnets. 10 bolters, 8 power fists, 4 chainfists, 2 power swords. 10 lightning claws, 5 hammers, 5 shields, 2 assault cannons, 2 heavy flamers and 2 cyclone missile launchers. = 50x arm/weapons requiring magnets to insert. PLUS 30x inserted into the shoulders if I want to allow all of the 15 marines to be flexible. Then some extra special treatment for the cyclone launchers in an as yet to be determined configuration...

~86x magnets to install in total.
Yeah. Not clever Ekfud.

But that gives the most flexibility with technically the least number of model bodies painted. It's also using pretty much everything out of the 3x terminator box sprues... so in a way it is kind of "efficient".

Let's add some pictures on how this process went... 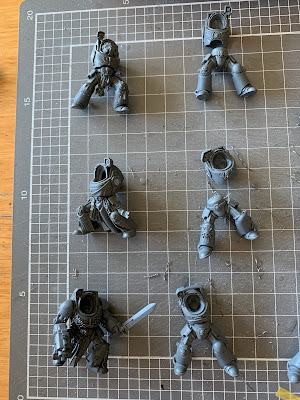 First up - worth noting that the Blood Angels bodies essentially come in 1-part; vanilla marines are separated at the waist (so they can be rotated to face different directions). The vanilla marines I am also putting a paperclip pin between torso & legs for extra strength. 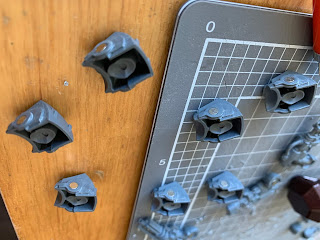 The regular torsos I thought would be best to put the shoulder magnets in first - these are 3mm diameter (1mm thick) and as high an N rating as can be grabbed (N52 I think for this lot). 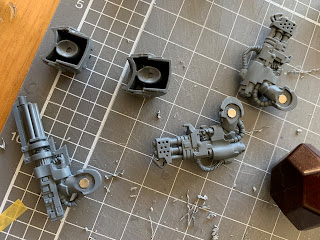 It was about this point I discovered that the BA torsos and the regular vanilla torsos are slightly different - and that they will cause a problem. All the standard weapon arms have a recessed area (where the magnets are in the pic above). You can rotate the arm about 30 degrees up or down around the circular part on the torso.

However - the BA close combat arms are all flat... the don't have the recessed area. 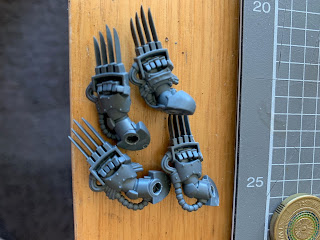 The reverse of that is that the BA torsos have an extra 'bar' at the top - which means the regular arms aren't going to fit onto them. 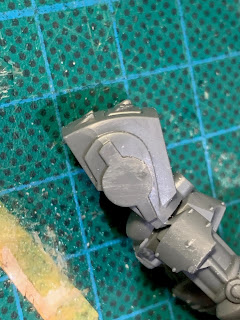 Taking a scalpel and a file, each of the BA bodies has had this little area removed... 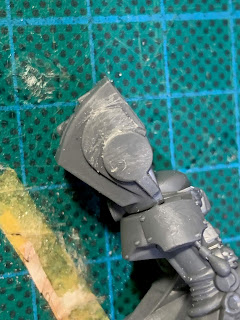 That way the fitting is exactly the same as for the vanilla marines... 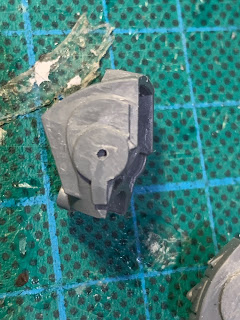 With all the shoulder magnets in place, next step is to then line up the combinations of legs/bodies with a mixture of poses across the 3x 'squads'. 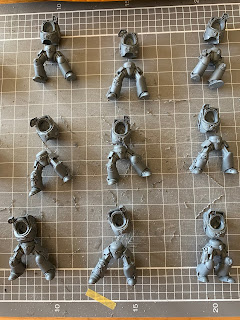 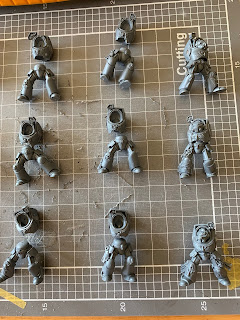 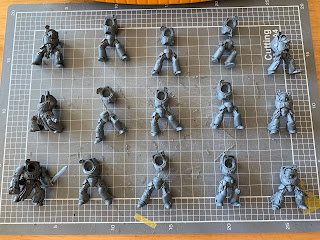 I've magnetised lots of regular arms before, but the 10% innovation area for this project was to try and get the cyclone launchers mounted on top of the shoulders.

Should have taken more pictures during this process... the cyclone launcher has 2 'feet' that go onto the top of the body. Each of these was drilled for 2mm x 2mm round magnets and superglued in. The torso, with the front still off, has a hollow interior (middle of pic below, next to the launcher). I could put a blob of superglue into the hollow area, hold the cyclone launcher (with magnets already installed) against the top where it needs to be, then drop 2 larger magnets (3x2mm) into the hollow area. 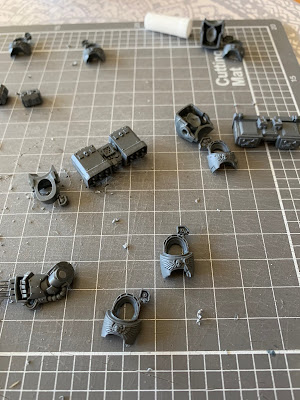 These magnets line up with the ones in the cyclone itself and the glue dries to hold them in place. Final step once dry is to seal up the torso with the front half of the body. The two torsos that can take cyclone launchers have the '3-eyes' targeting systems so I can spot them easily. 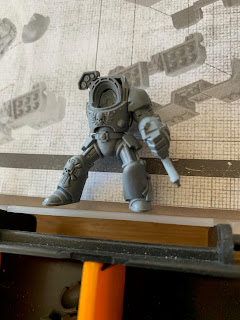 The 6 heavy weapons (2 of each) I'm feeling fairly good about - this was probably the most critical part to get right, as they give the most flexibility to the overall loadouts. 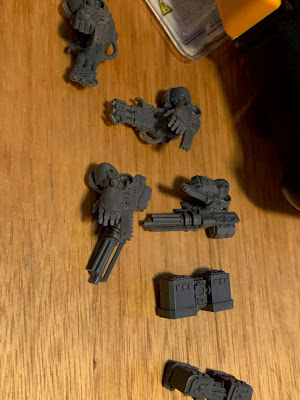 I also changed my previous policy on magnet polarity in arms/shoulders - the left arm is inverse of right arm (across all 50 arms...) so that for sets of arms which are in storage, the magnets will hug each other and keep them together. It also means that a left arm can only go on the left side of any torso. 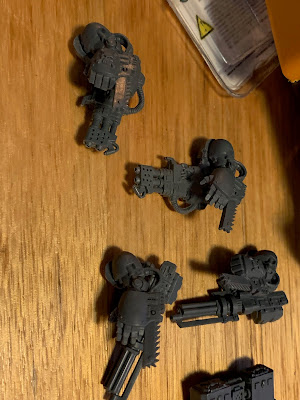 That's more important for the claws & hammers - where the specific items are a matched set/pose and not really interchangeable. Keeping these together in a storage box is a good thing. 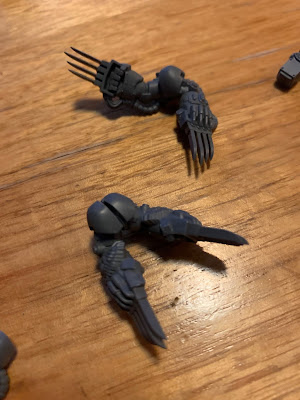 The rest have gone through mass-production magnetisation... 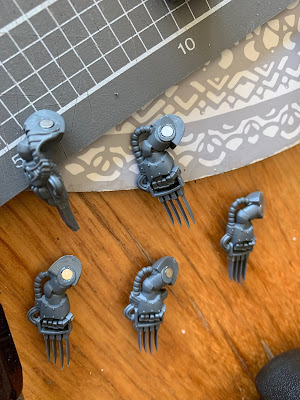 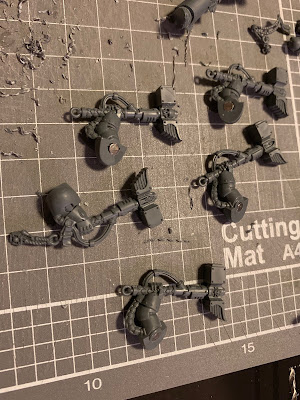 With all the hard stuff done... the last issue for the arms was fitting pads over the top. Again... 50x of these. I actually had a set of old Forgeworld Blood Angels terminator pads in my bits box... I'd been keeping them for just this occasion (they were bought during the clearance when FW stopped making them), but... just not feeling the urge to use them. Keeping 10 regular, unadorned terminator bodies in the mix I wasn't that keen to add more bling now. Flat pads with some decals for the most part is what I'm going with. 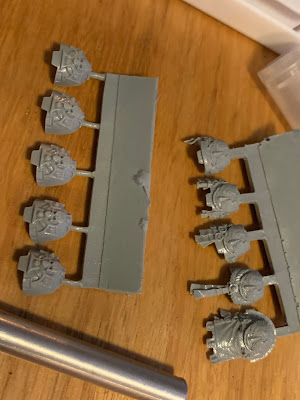 That meant I had to order a few spares from ebay to cover all the options that were created; but that cost was only a few dollars from a parts reseller. 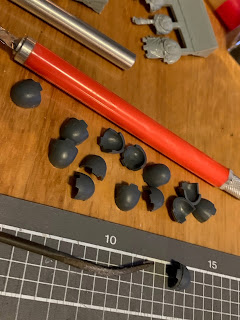 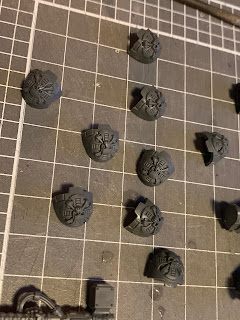 They are actually a lot easier to sand/cleanup than regular marine shoulder pads, as these don't have the 'lip' around the edge of the standard tacticals. 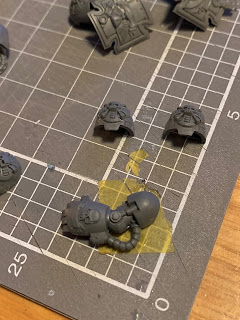 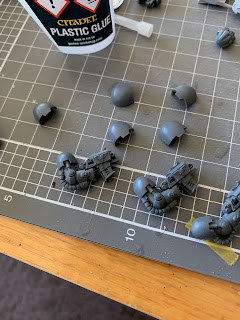 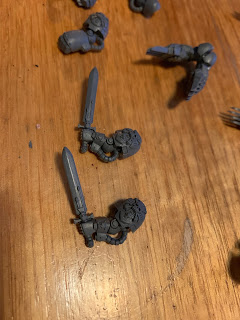 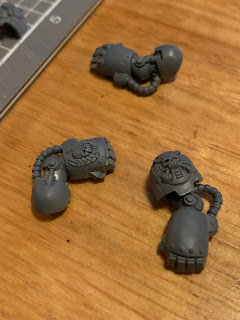 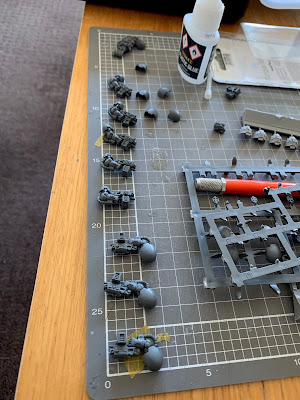 While I've kept most of these quite clean/bare - as a minor nod to the BA blinginess... sergeant-friendly arms are using slightly more decorated pads... eg, the claws below have one of the wreath icons from the BA close combat squad. 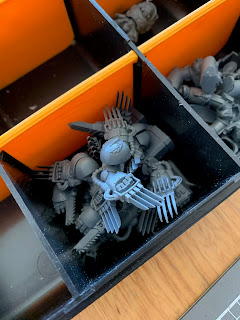 The last stage before priming - getting the legs pinned for bases. Below is the first 5 of 15 with pins temporarily standing them upright. I've got a mix of different 40mm resin tech bases from dragon forge and others... mainly in the deck/tech type ranges so that they will look pride of place in a Space Hulk. 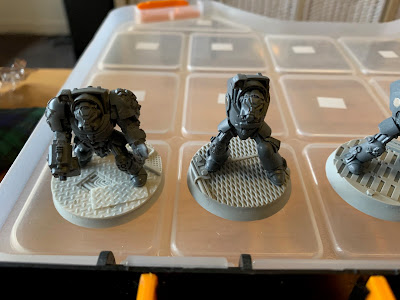 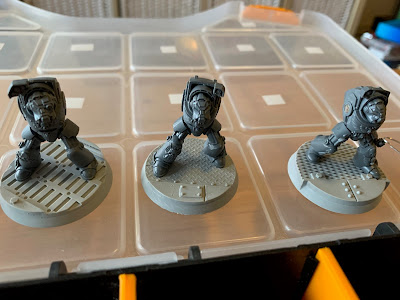 And... that's most of the prep done - however there are 2 special offshoots I still want to add before painting.

1. Space Hulk also has a librarian - so adding the BA terminator librarian to the mix needs to happen. Yes, he uses blue rather than red - but if I don't do him at the same time as these guys I probably never will.

2. I have some Karlaen bits which I'm never going to use for a captain... plus I now have a terminator banner from the BA kit. Building a terminator Ancient standard bearer is also on the cards.

Once those 2 are added to this lot... they will go over to priming.