It has been a kind of fun change doing these boards on a much bigger scale than troops - although it's still a LOT of painting to cover. Now on to washing large parts of the boards. 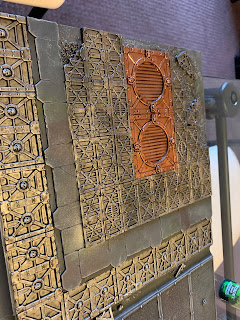 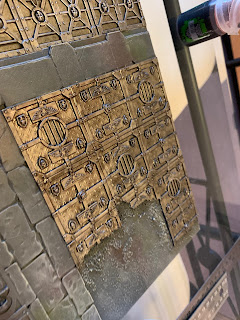 I suspect that they could have been washed more heavily, but trying to spread the wash supplies out more thinly.

The footpath areas have a mix of nuln oil and athonian camoshade; the corner/side panels have both of these plus some patches of agrax earthshade (particularly on the bronze areas).

Some of these seem a bit too subtle - comparing directly below (no washes yet) to a washed section (with the eagles), it looks more like some rough smudging than a dark colour. Definitely catching in the deeper areas though so at least there is definition of the shapes. 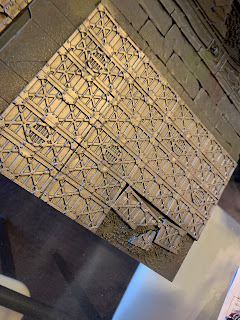 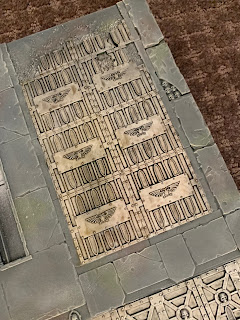 Deeper recessed areas and the diamond plating seem to have take the wash better - these have some nice darker blotches which should show up well after a silver drybrush. The bottom photo here with the sunken pipes you get a better sense of how the green and black washes give some variation. 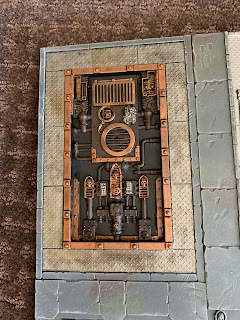 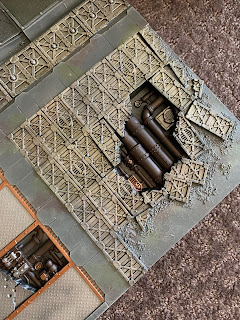 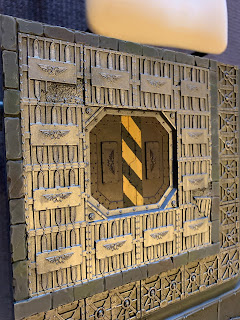 Then with a wash (board on the right) and finally with a metallic silver drybrush on the left. These are coming up well - the much darker bronze gives a really good contrast and worn metal look with a hint of necron compound over the top. Also really like how the quick silver drybrush has picked out all the bolt heads and given the hazard stripes a bit of paint chipping. Quick and effective. 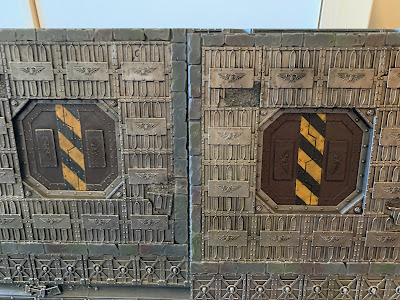 With most of the board now at least up to wash & necron compound drybrushing, there are still a couple more 'detailed' panels that need more detail & specific colours.

On the T-intersection boards, that's the crypt sections - 3 panels with lots of inlaid details. I've decided to go a bit funkier than Lord Duncan's guide where he paints the whole thing in bronze and make the panels in the more of a feature. Balthazar gold still goes down first but roughly leaving the panel sections. 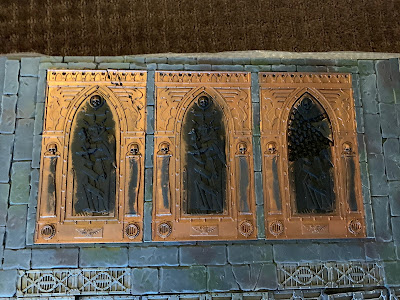 And since the skulls under the broken plates will also be getting an agrax wash, colour them in too with zandri dust. 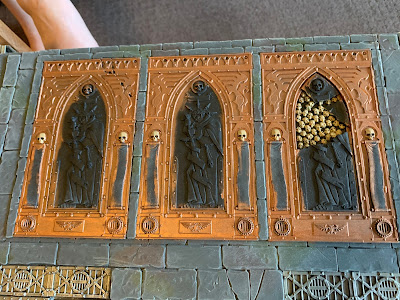 It occurred to me afterwards that the bigger ones on the main panels will catch some necron drybrushing later on so they probably could have been done later instead.

On the other board type (with a straight road) there are 2 sections with more detail - the massive aquila plate (which also has this section below it), then an area holding a lot of pipes & connectors.

The two pics below are the 'stone' areas (which were originally painted with skavenblight dinge) just heavily drybrushed with administratum grey to bring out the raised edges. Pretty quick and it gives a nice stone effect very quickly. 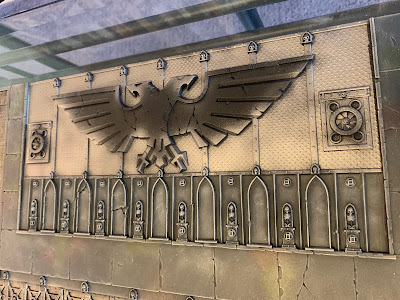 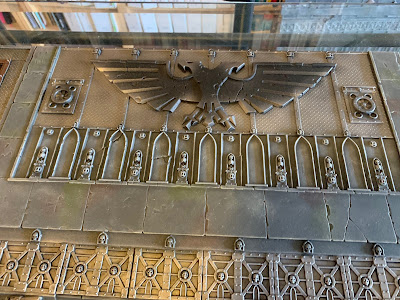 The pipe sections on these boards have had a rhinox hide colouring added roughly to the pipes themselves, then balthazar gold for the metal strips. Couple of hints of leadbelcher on control panels. Don't quite know what to do with the raised fans - I think these will just need to get a lot of rust and corrosion added to them at the end. 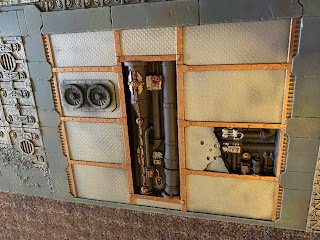 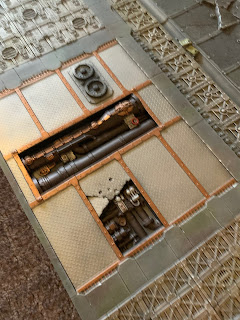 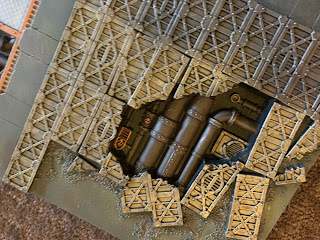 While we're at it - bronze colour on the strips surrounding the aquila as well. These last couple of steps are getting to be a bit fiddly and time consuming (relative to slapping paint in big areas), 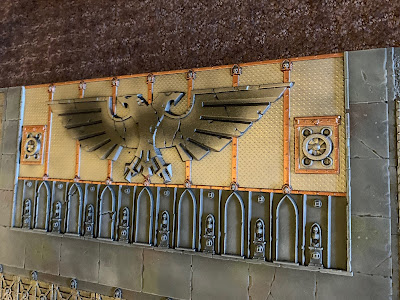 Then everything that hasn't already had a wash gets one. The diamond plates and surrounds with a mix of the 3 coloured washes. I've left these a bit thicker and blotchier to look like rough grime and wear. 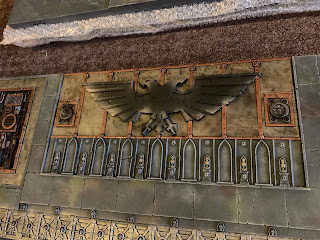 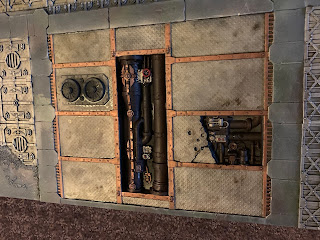 For the sarcophagus plates, this is just agrax earthshade by itself followed with a drybrush of necron compound to catch the edges. 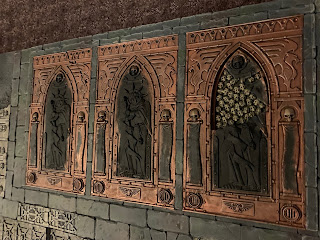 Guessing they are now about 85% done at this point.

From here, the main details that need painting are the burial plates and the aquila inlay. I'm expecting these will take extra time to add the effects I have in mind, mucking around with marbling details.

Then the last step (or several small ones really) will be on various weathering tweaks -
- Typhus corrosion & orange rust on a lot of metal details
- Heavy typhus corrosion on the pipes and some in the gutters
- nuln oil and agrax gloss washes for patches of liquid spills
- *Maybe* a few sprays of black with the airbrush to simulate scorch marks.
Posted by Ekfud at 00:05