I've had my command squad dudes semi-completed for months, and (barring some varnish) have finally added the last few trickier things I'd been putting off... 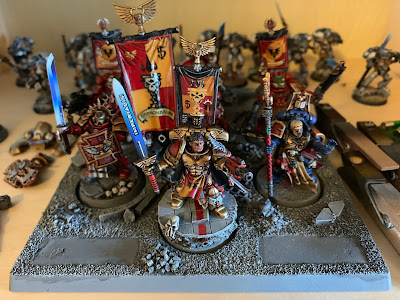 While the librarian and captain themselves have been done for a while, the outstanding items were still...
- Champion
- Standard bearer
- 2 lieutenants
- Medic
- Captain's powersword (magnetised arm)

The 5 red bodies have generally followed my normal process (although they have even extra decorations), with a few extra snippets...

Lieutenants have bolters from the sternguard set (yet more bling), gold helmets & iconography. Arms and pack are magnetised as well, should I at some point make some alternatives. 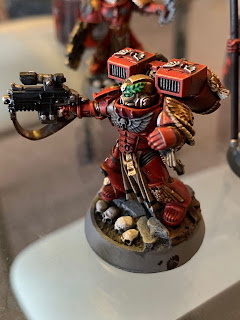 The right shoulders have the red & yellow quartering of the company markings, and after mucking around with the robes for a while, decided to add a black stripe to the 5 command members (along the lines of the black drop being the company marker). 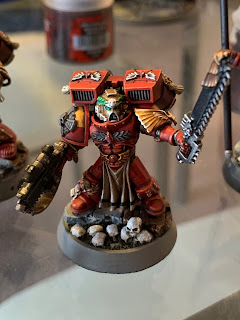 The medic was somewhat problematic... I can't seem to do a good job of shading and layering white. This was grey, with nightshade (blue) ink, followed by a couple of layers up to white scar. It's ok but still seems a little blotchy. 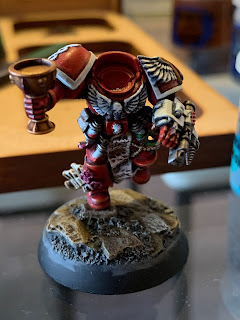 Company champion uses some of the original command squad parts, with a few extras thrown in - upgrade set helmet, terminator shield and a sanguinary guard weapon. The jump pack is from Delassio, which has a nice little extra halo, and looks the part on a champion. 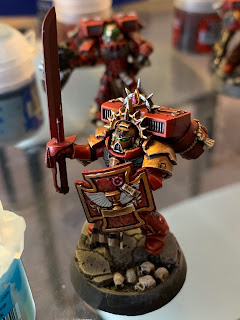 The last of the command squad is a standard bearer. He has been given a couple of extras/upgrade parts but is very similar to the DC standard pose I had done previously. 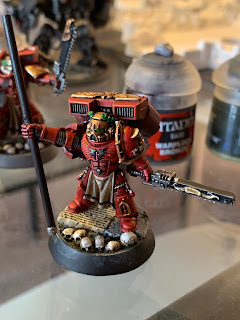 One of the reasons I have been putting this group off is thinking and rethinking about how to best do the company banner. I ended up using a very old (2nd Ed) graphic, plus some new banner text to print onto decal paper. Since the paper is transparent, that also means putting down one transfer, painting it grey/white, then layering another over the top. 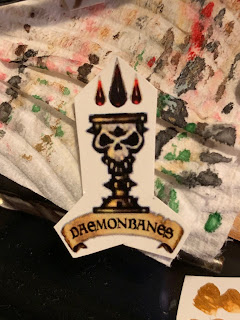 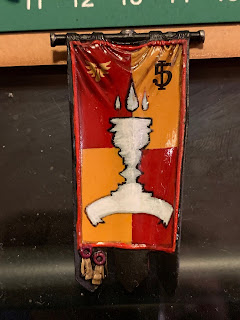 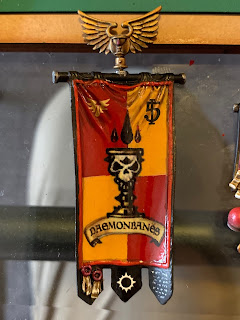 The result is actually not bad - although wondered in hindsight if it needs a bit more decoration & detail. It's close to what I had pictured in mind and should do the job.

Each of the command squad had a magnetised jump pack plus a standard one - this was a little test of using black chapter markings over gold for the lieutenants and they look quite sharp. Tempted to go back over my older sergeant ones (black on red) which are a bit dark overall, making the marking harder to see. 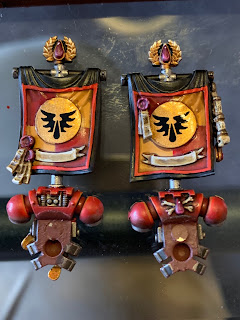 The other fiddlier bit was putting some colour on the champion blade (along with captain one at the same time). I get a bit nervous using late-stage airbrushing, so carefully covered everything else in glad wrap. 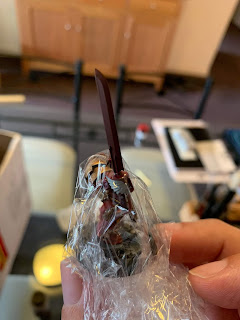 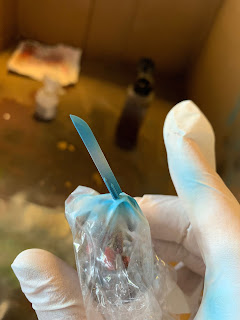 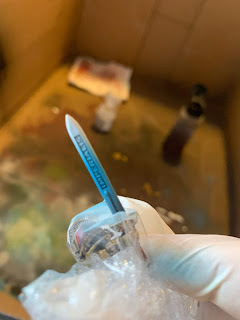 After colouring once, the champion blade was masked with a line of tamiya tape and reversed for the back. 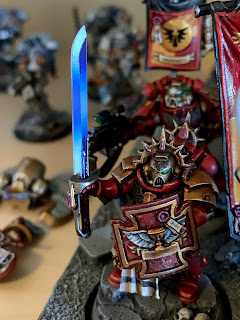 The effect is much better than I could do by hand, although a decent wet-blending painter could probably do it quicker than me changing 2 airbrush colours.

While not perfect, having these ones done feels pretty good - procrastinating over wanting to do the best possible job on characters isn't a good strategy and just means unfinished bits pile up. 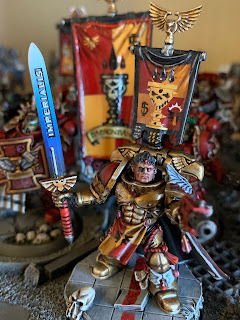 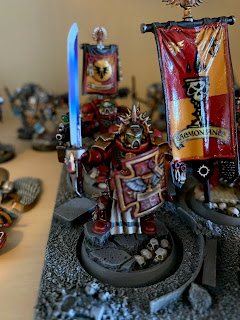 Having taken a while on the details for these guys (plus doing multiple sets of backpacks), I'll switch to some of the side projects next - full set of space hulk genestealers that I've been planning on doing quickly rather than to a high level of detail.
Posted by Ekfud at 15:34