Woot - finally getting some mass production underway... I may have gotten a bit carried away with spraying everything and only took a few mid-progress pics. 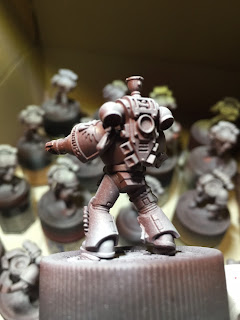 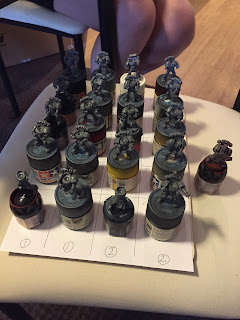 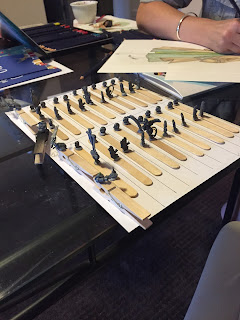 Stage 2: undercoated/primed all the minis with German Red Brown primer (vallejo); then dusting with grey primer (vallejo) on upper surfaces/front, giving everything a snow effect. 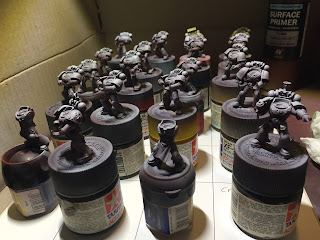 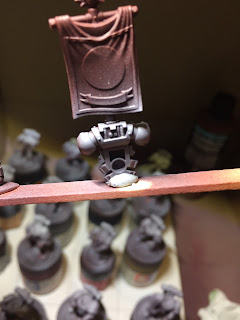 Stage 3: 50:50 thinner with GW Mephiston Red (air) for a very light coat. This doesn't give as strong a shadow as pre-shading would, but gives a somewhat subtle light/dark gradient. In hindsight, a darker pre-shade would have given more contrast, but we're going with post-shading with Agrax now that the meph colour is on... 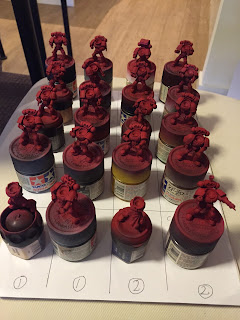 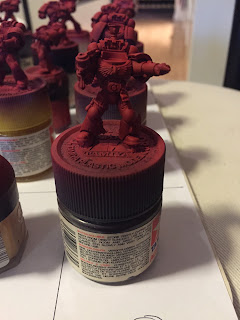 Extras: Weapons and some of the accessories (belt feed for heavy bolter, etc) basecoated in black primer. 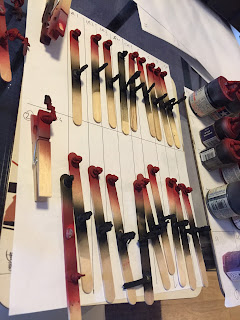 Similarly for the bases - primed with vallejo black, then drybrushed heavily through dawnstone & ultuan grey. In hindsight, the dawnstone took a few (light) coats on the base rimes - I'd probably airbrush them with dawnstone over the primer and then use nuln oil to add a bit of shadow back to keep the finish smooth and save a little time. 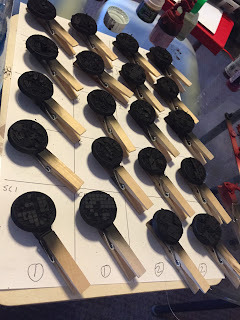 Heavier patches of gravel on the bases caught a random hint of GW wash - a random choice per base from seraphim sepia, biel-tan green, carroburg crimson or agrax earthshade to give some variation to colour.. then brown/orange for either rust or brick areas, with a light flick of ironbreaker on the metals. 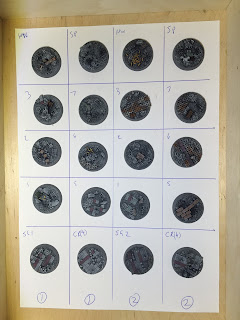 Up next: a few more spot details with the airbrush (banners & cloth) before a heavy gloss varnish to help the agrax washes into crevices.
Posted by Ekfud at 10:18