Follow up post... wanted to try out the airbrush on some smaller bits and see how it goes at filling in details rather than just covering the side of a house. 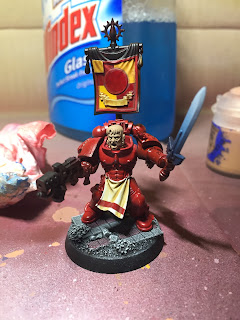 Power weapons:
I'd had a go at using blue-to-white transitions on my grey knights a couple of years ago, masking off half the blade and alternating the direction the colours fade; this power weapon was a much quicker single-transition - but helps the sergeant stand out immediately. 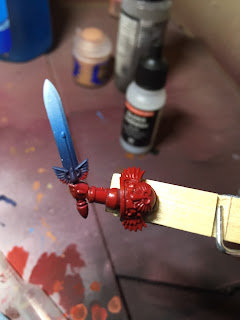 Back banners:
These were quite fiddly, but the result was worth the effort, as it gives a much nicer finish with airbrush... As per prior post, the 5th company iconography is based on a chequered pattern:

This went on via some Tamiya tape and blutac masking, aiming for as close to quartered as possible inside the square frame section of banner 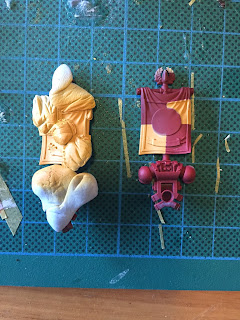 Pic following quick wash of agrax earthshade and some colour on the scrolls. 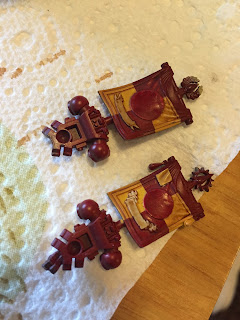 Cloth:
Probably overkill, but wanted to add something to the fabric other than a decal - so leaving the red basecoat as is, put a little strip of tamiya tape and some blutac masking on to cover. Then a light dust with mournfang brown, heavier zandri dust and tiny bit of ushabti bone through the airbrush. 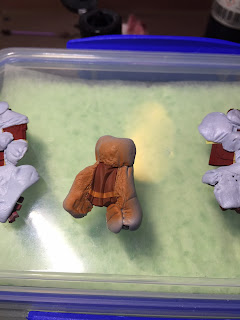 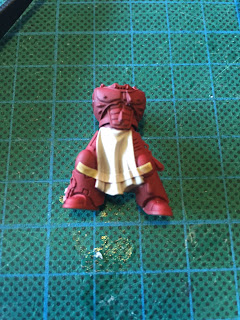 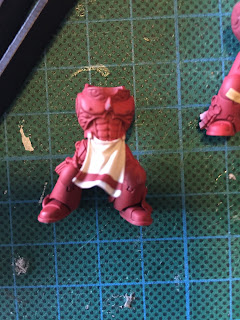 'Eds:
Last bit before the airbrush packed away was to add some flesh tone to the 3 unhelmeted heads. Top down essentially so there is still some shadowing from the black primer on lower surfaces. Not that you can tell as there are actual shadows on the image. 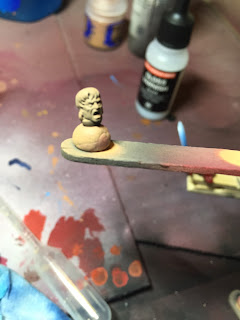 Quick shot with the troops dry-fitted onto their bases. They look very shiny from the gloss varnish before washes - much of that will go with a final matte coat (although hopefully without impacting the red too much). 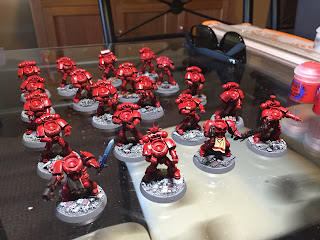 3rd tac squad sergeant with the magnetic arms on and dry fit head/pack. Still quite a bit to do, but the areas airbrushed already give an idea of the final look.