I always thought white was a horribly frustrating colour when painting masses of Biel Tan armour in the past... add even a little bit of shade and you have to come back with 5-6 thin layers of white to cover the colour or any stray marks. Several experiments in approaches to painting red have just about got me sorted out on the 'recipe' for the 5th company. 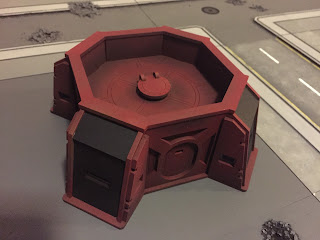 Red seems to have it's own challenges - it can be quite translucent, and seems to take a lot of the tone of whatever is below it, so colour of primers and number of coats/evenness can influence the end result.

I actually don't particularly mind Mephiston red, but I'm also keen to avoid using a flat Mephiston red all over - ideally getting a darker look, but also with a bit more variation than just wash-in-crevices. Lots of online research has turned up a heap of different techniques - many of which (including the GW approach) seem to come out very orange...

Some good alternative schemes for BA during the research:

ilikebmxbikes (blog). Really like the rich red effect that this army has achieved - using a similar highlight scheme to GW, but with lots of red ink to blend everything together and darken the overall effect. Unfortunately, the key layer (GW red ink) has been out of production for some time now, and bloodletter glaze is effectively orange. I tried out a couple of sample pieces using windsor & newton red calligraphy ink and think I could just about pull that off - but it's almost like adding a layer of glass. Kind of like the look of a red toffee-apple... it might be worth investigating other inks as alternatives, but parking this option...

From the Warp (Ron): http://fromthewarp.blogspot.sg/2011/01/working-with-red.html
Excellent look... although Ron uses some quite bespoke paints and would rather stick to a vallejo or GW paint for consistency if I end up doing 100 minis over a couple of years. His weathering & detail tutorials are awesome... well worth a look even if not using his red colour schemes.

Eggroll's blood angels (forum blog)... basically Eggroll is an airbrushing god, and has a really different way of shading/highlighting; basically using black over red to shade (rather than black underneath to pre-shade), making the overall effect quite dark/contrasted.

I tried the colouring out using the airbrush on some 'starter kit' marines, although rather than trying to post-shade with black, I stuck to using a black oil wash. 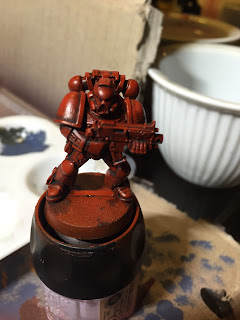 This actually comes out ok - nice darker version compared to the GW default approach, although the oil wash took longer than I'd like to clean up with cotton bud/spirits and the surface remained tacky for days afterwards with the oil finish. 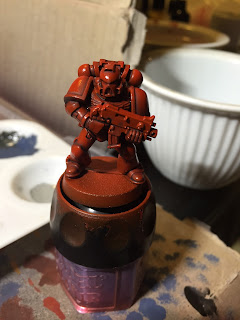 Second marine got similar treatment, but this time using a tamiya panel (pin) wash usually used for aircraft kits - which produces a much neater finish with less cleanup. I should spend longer testing out oil washes but I'm not 100% sold... I can probably get the same effect with a fine detail brush and GW wash without some of the mucking around. The gloss varnish makes a LOT of difference in getting the washes to snug down - everyone says this, but having tried it both ways I'm definitely adding gloss before washes.

Irwits blood angels (Blog) focusing on dark crimson colours... one of my favourite schemes but very difficult to replicate (for me at least). He uses 'standard' reds, but then goes over these with light black oil washes and carroburg crimson as a layer over everything.

I tried this scheme using one of the starter minis (although neglected to get a photo of the result before putting it back into simple green...). My challenge was getting the right mix of black oil wash under the carroburg crimson - the result was murky/patchy in the end... I *think* because I was cleaning up the oil wash with spirits (taking off some of the gloss varnish), which then means the surface has rough/smooth patches and the crimson wash sticks in some places but not others. I could add a second gloss layer after the oil wash, but that might be one step too many switching between airbrush and hand.

The mighty brush: recently posted a new guide on BA minis, although I'd come across the drop-pod tutorial earlier. http://www.themightybrush.com/how-to-paint-blood-angels-part-i/
I tried the drop-pod scheme out on a CNC scenery bunker that I had assembled ~6 months ago but never painted. German red primer -> yellow primer highlights using card to protect shadowed areas -> RLM23 red as a glaze over the top. Slight drybrush highlight of mephiston red on the edges to bring it up a bit/edge highlight with evil sunz.

I actually really like this BUT - the RLM23 is a very transparent colour, and is more magenta than red by itself... using the yellow underneath makes it come up as red but that also means that it would be virtually impossible to get the same colour using a brush to touch up later. Adding more pure RLM23 will push the colour to magenta? 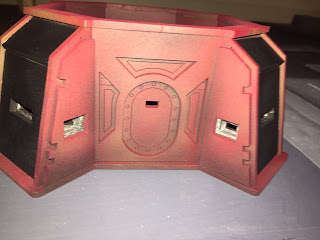 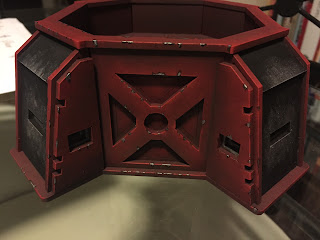 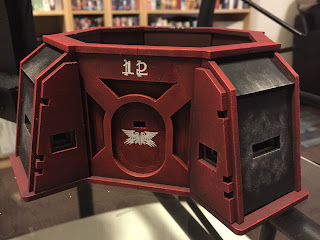 Scheme Ekfud (TM)...
I think I'll take a few elements of these together - while probably not the most ambitiously different or contrasted colour sets, I'm mixing some of the Mighty Brush with GW:
- German red primer (Vallejo). This is awesome... it seems to give a great base coat.
- Zenithal dusting with grey primer & select areas
- Thin overcoat with GW mephiston red
- (Gloss varnish?) probably worth doing before washes...
- GW Agrax earthshade or Nuln oil (agrax is probably more interesting than straight black)
- Glaze some of the big areas with meph red to bring up colour
- Tiny highlight with evil sunz scarlet (line highlight on the bunker above seems ok)
- Very, very small highlight with something that isn't orange. Luther (mighty brush) uses a tan rather than the GW preferred orange colours...

I have a suspicion that this might end up looking a little flatter than some of the blog schemes - I'm not using black shadows or bright orange/white highlights so the colour range will be reduced - but let's see how it goes.

Email ThisBlogThis!Share to TwitterShare to FacebookShare to Pinterest
Labels: Experiments