Space Hulk board tiles in action (with terminator stand ins)

I finished up my Space Hulk tiles a little bit before Christmas but never got around to adding some photos of them in use. Few pics from a game earlier this year. 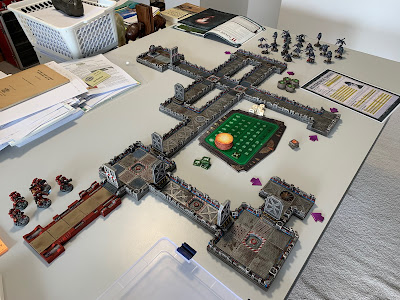 Suicide Mission is about as small a game as you can away with from the space hulk mission book... and with tiles based on 40mm squares it still takes up half a decent sized dining table (or about twice as big as the cardboard tiles that come with the box). The full set (including all the pieces not on the table) are about 12kg worth of plaster. 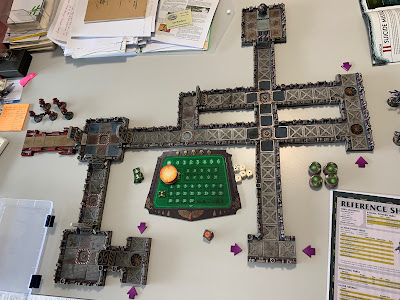 Having not yet painted up the terminators, I have some tactical marines standing in. Not exactly the same thing, but since the main loadout is storm bolters and fists it's not far off. I have a heavy flamer from a tactical squad that is close enough, and a sergeant with power sword. They have a nice red boarding torpedo made from assorted Hirst art castings, so think they all look the part. 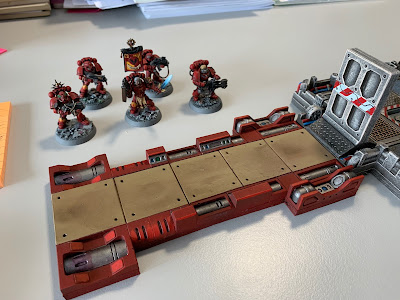 In the blue corner, we have a heap of genestealers. The paint job on these is a bit rougher than my blood angels, however all 20 of these took probably less time than a 5 man marine squad to paint. 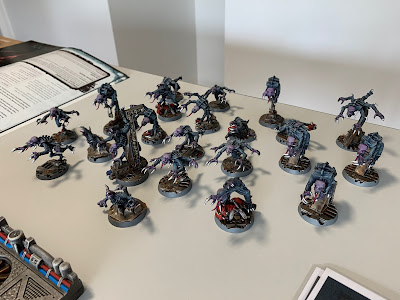 The mission objective is to flame a comms console in this room. Given it's called 'Suicide mission' I figured substituting in an exterminatus device would be appropriate. Set that off and the marines win. Sort of. 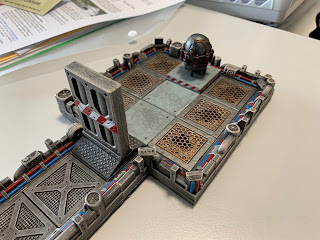 Since I'm a little OCD, I also went around the edges of the cardboard tokens with coloured sharpies to give them a bit more finish. 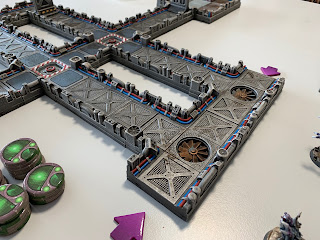 Taking charge of the genestealers for this game; we managed to fumble a couple of the rules on overwatch and jamming (rereading them after the game) that gave a little advantage to the marines, but still felt that it kept to the spirit of the game. Marines nearly overwhelmed at one point... went down to 2 remaining when the flamer barged his way into the objective room and finished things up. 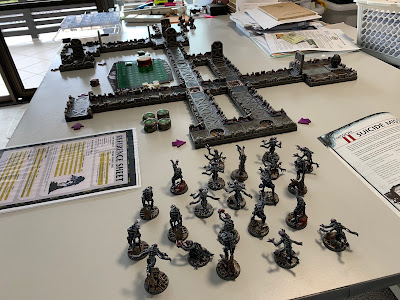 Feels good to finally lay these tiles out in a game - there are plenty of little details in the colours and markings that took some extra effort at the time and give some unique flavour to the tiles. Doing all the red and blue tubing was the most time consuming stage of painting however it definitely helps both add some colour to otherwise monochrome flooring as well as tie together all the different styles of tile as being part of one ship.

Since these photos were taken, I've now got the terminators up to painting stage - 15 bodies and 50 magnetised arms so they can be used in all sorts of regular configurations or loaded out for space hulk missions. Hopefully posting some progress on them soon.